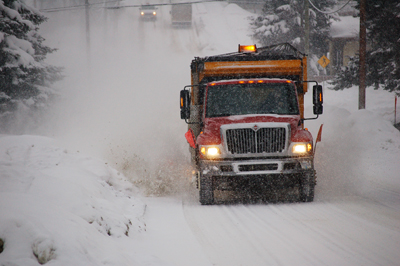 With over 400 lane kilometres of streets and roads throughout the City of Salmon Arm, it is a challenging exercise to balance staffing, resources, budgets and weather conditions. Salmon Arm relies on your cooperation to help keep our streets and sidewalks safe during the winter. Please read the following carefully.

Snow and ice control operations by the city such as salting, plowing and removal, in some instances, are performed 24 hours a day. Clearing snow can take up to three days after the end of a snowstorm and is completed based on a predetermined priority basis.

During and after a significant snowfall, the primary concern is keeping the arterial routes / major roads clear and passable. These routes may be done several times prior to other roads being done once, which can leave secondary roads noticeably unattended.

With a significant snow fall it can be a challenge over several days to get all streets and sidewalks cleared. Below is our priority-based decision matrix:

The City plows or blows snow from the sidewalks with school zones and steep areas on a priority basis. Sidewalks are cleared by the City at the same time as the street snow removal is done during regular hours of operation, not on weekends or on overtime situations.

Please visit our Request Tracker to advise the city of any maintenance issues.